WOW! After much torture and brain spasms, I was finally able to follow YouTube video instructions (not their fault) to bring you the link to my video: click here . Let me know what you think? Rather an amateur endeavor, huh? I must admit it, however, in a strange sort of way — I like it.

But, I am annoyed at the caption (and incorrectly stated, if I might add), it wasn’t my wish to present any “surreal philosophy” of mine; instead, the film was boring on its own, and I was hungry. I’m a bear without breakfast, and besides, I hate giving out interviews. I asked that they do “something” for I looked too surreal and old talking to myself.

In contrast, I’m glad they didn’t edit out the part of The Pickled Man, which is why I interviewed in the first place. As I posted earlier, the digital version is available on Amazon for pre-order now. Both digital and print versions will publish on June 29th. I am just waiting on the proof to arrive in the next couple of days to sign off. 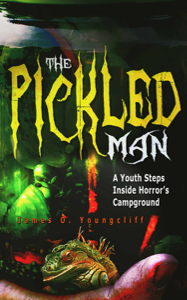 BTW, what do you guys think of the cover? Creepy I bet! The black and white picture is even more disturbing. More hints and comments to come on the storyline.

Hey, this post is getting too long; let me end it with a “many thanks!” And keep coming back. — j.o.y.

James O. Youngcliff is a children’s fiction writer who has published several exciting “telling stories” for adolescents with his BluBerrie Series. In addition, he’s written several fantasy novels for the advanced young adult reader. His works, however, never fail to impart wisdom for those willing to take the time to go down the “road less traveled.” So, prepare yourself for the strange, surreal, and twisted. Originally from New York City, he lives in Dade City, Florida and when not writing, he oil paints, and exhibits in art galleries throughout his home state. Currently, he is working on his fifth BluBerrie Chapter Book, BluBerrie: The Botanical Garden, publishing soon. Be sure to check BluBerrieBooks.com for more book details or visit his blog at JamesOYoungcliff.com. To purchase his books, go to Amazon.com at: https://www.amazon.com/James-O-Youngcliff/e/B07DR671HL?ref=sr_ntt_srch_lnk_3&qid=1627826452&sr=8-3 View more posts